On Christmas Eve, we saw the cheery news that Maine was the only state in the nation to have more deaths than births last year. While seven other states also saw population declines, it was due solely to people moving. Marking the third year in a row deaths have topped births, the report is a reminder of the demographic challenges Maine will face in coming years as the state’s population ages.

Everyone knows that Maine is the oldest state in the nation, but it’s important to look at how that can impact the government and economy. A key number for understanding this impact is the old-age dependency ratio: the ratio of the working-age population (15-64) to the post-working-age population (65+).*  A low dependency ratio creates economic and political problems since the healthcare and pension services required by senior citizens are supported by the income and taxes of workers. It is also a sign of future population decline, which leads to a decline in economic activity. 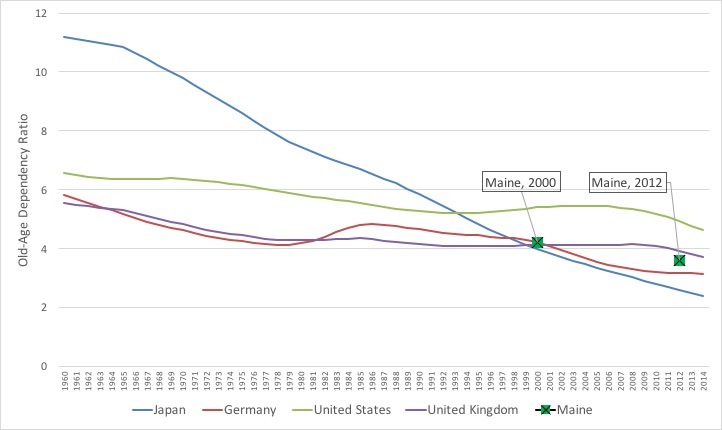 Maine’s old-age dependency ratio compared to some developed countries. Developed countries generally have lower ratios than developing ones. Nigeria’s, for example, is around 19 and would be off the chart. Source: World Bank.

For proof, we can look at Japan. They have the highest old-age dependency ratio of any country. As of 2014, it was 2.4, and it would drop all the way to 1.3 by 2060 if current trends continued. Having nearly one senior citizen for each person of working age is a problem for an economy. 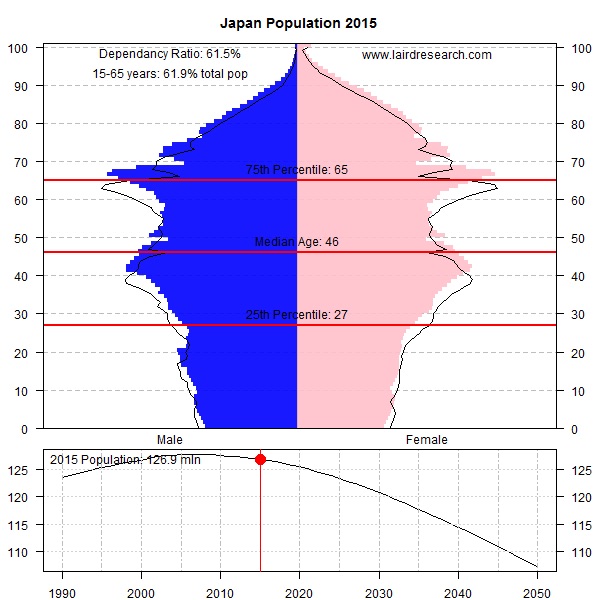 Click for an animation showing how Japan’s population will continue growing older. Source.

Japan’s economy has already been struggling for years for a variety of reasons, each compounded by the country’s demographics. But they face a much worse crisis due to the effect of the shrinking dependency ratio on debt. It is no coincidence that Japan has the highest public debt to GDP ratio in the world, by far, at 245% (i.e. government debt is more than twice the size of the whole economy). This has been possible to sustain so far due to the particulars of the Japanese economy, but it won’t be able to handle such high levels of debt forever, especially not if it increases along current lines.

Fixing the problem of a shrinking population is not easy to do. Especially when the government has been overly optimistic about it for far too long: 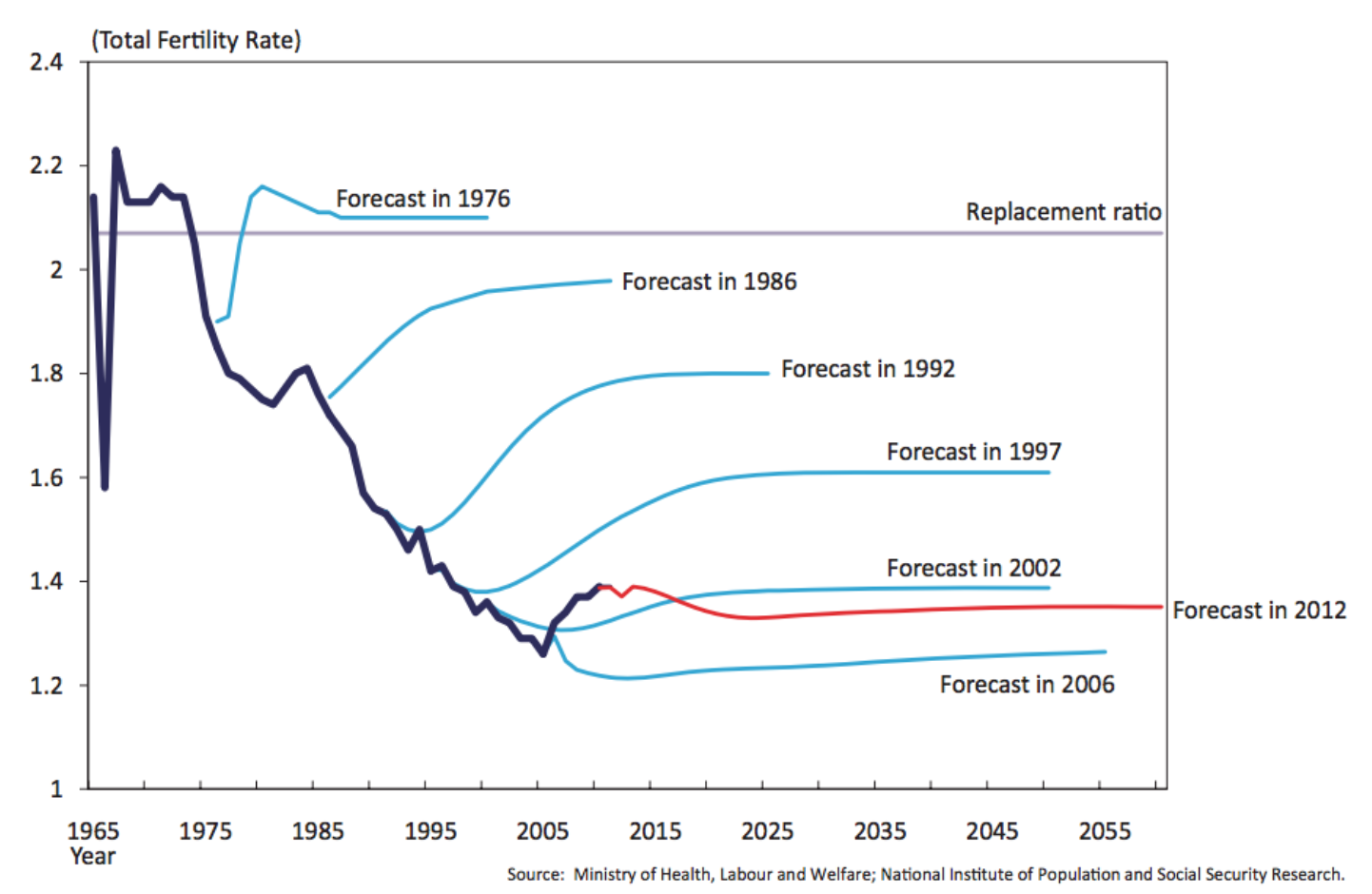 Projections by the government of Japan often thinking, quite incorrectly, that the birth rate would suddenly rebound. Source: Waseda University working paper.

There are two components to population growth: birth rates and immigration. Boosting the birth rate is tough to do through public policy, since it is largely an issue of family culture. But that hasn’t stopped the Japanese government from trying (including by paying for dating services). One of the best approaches, which they are considering, may be to make it easier for mothers to work, since this can both increase workforce participation as well as birth rates. The government has taken some steps in this direction, but they have a very long way to go. Long working hours and little help from husbands (Japanese husbands spend 15 minutes with their kids a day on average, much less than those in the U.S.) contribute to the fact that 70% of Japanese women stop working when they have their first child. Expanding maternity leave and making child care services more accessible are two things the government is working on that could help.

Aside from raising birth rates, the other way to increase the working population is through increased immigration. This is what has kept the U.S. population growing despite birth rates at replacement levels, and it is also what seems to be turning Germany away from the same fate as Japan. But immigration is unlikely to increase in Japan anytime soon without significant changes. The country is extremely homogenous—98.5% of the population is ethnically Japanese—and not by accident. The naturalization process is difficult and there is no birthright citizenship law like that of the U.S., so people born there to foreign citizens retain their parents’ foreign citizenship. The business culture in particular would likely be ill-suited to deal with the level of mass immigration that the country would require to compensate for the low birth rate, since corporations tend to not be very welcoming of foreign workers. That is a problem when the point of increasing immigration would be to increase the number of workers.

Whatever approach they choose, Japan will need to make some significant changes to get themselves out of the demographic hole they’ve ended up in. Maine’s aging problem is not as dramatic as Japan’s—the population decline last year was only 928 people—but it is an issue. The birth rate is low, as is net immigration, and there is not much being done to boost either. The economy as a whole will be increasingly affected in the coming decades if the trend isn’t reversed, as will perennial political issues such as the underfunded state pension fund (since there will be relatively fewer people paying into it) and school district management (since there will be less tax revenue and fewer kids to go to school). Demographics can’t turn on a dime, so the state should be looking at all available options to head the problem off before it starts taking a real toll.

* The general term “dependency ratio” (without the “old-age” prefix) includes kids below working age. I only refer to the old-age dependency ratio throughout this piece.

Phoenix McLaughlin works at the National Endowment for Democracy helping to foster political development in Asia. Phoenix lives in Washington, D.C. now, but was born and raised in Norway, Maine. In between, he has studied and/or worked in Colorado, Nepal, India, France, Ethiopia, and Augusta. All opinions expressed on this blog are solely his own and do not represent his current or former employers.

This blog has been archived

This blog has been archived and is no longer being updated.