No news tends to be good news for the Maine paper industry. But there’s been a lot of news recently. Headlines about the closure of this mill or that mill seem to come every few months. Since December 2013, Maine has lost about 2,000 jobs in paper manufacturing. Since 1990, the state has lost 13,000 out of 17,700 jobs in the industry, or about 73%. It’s a similar story for all wood manufacturing industries in Maine. I grew up across the street from the Cummings Mill in Norway, a dowel factory, which shut down in 2002 after 142 years of operation. It was bulldozed, laid empty for years, and just recently turned into a medical office park. There may be no better analogy for Maine’s economy as a whole.

The original reason for the Cummings Mill closure? Competition from overseas. There is no shortage of talk about how manufacturing in the U.S. has been exported elsewhere, and the paper industry is no different. Paper manufacturing has grown substantially abroad, especially in Asia, and is likely to continue to do so. Paper consumption, meanwhile, has not been growing much globally, and has declined in the U.S.* Here’s what the paper pulp production trend has looked like among the top global producers over the last fifty years: 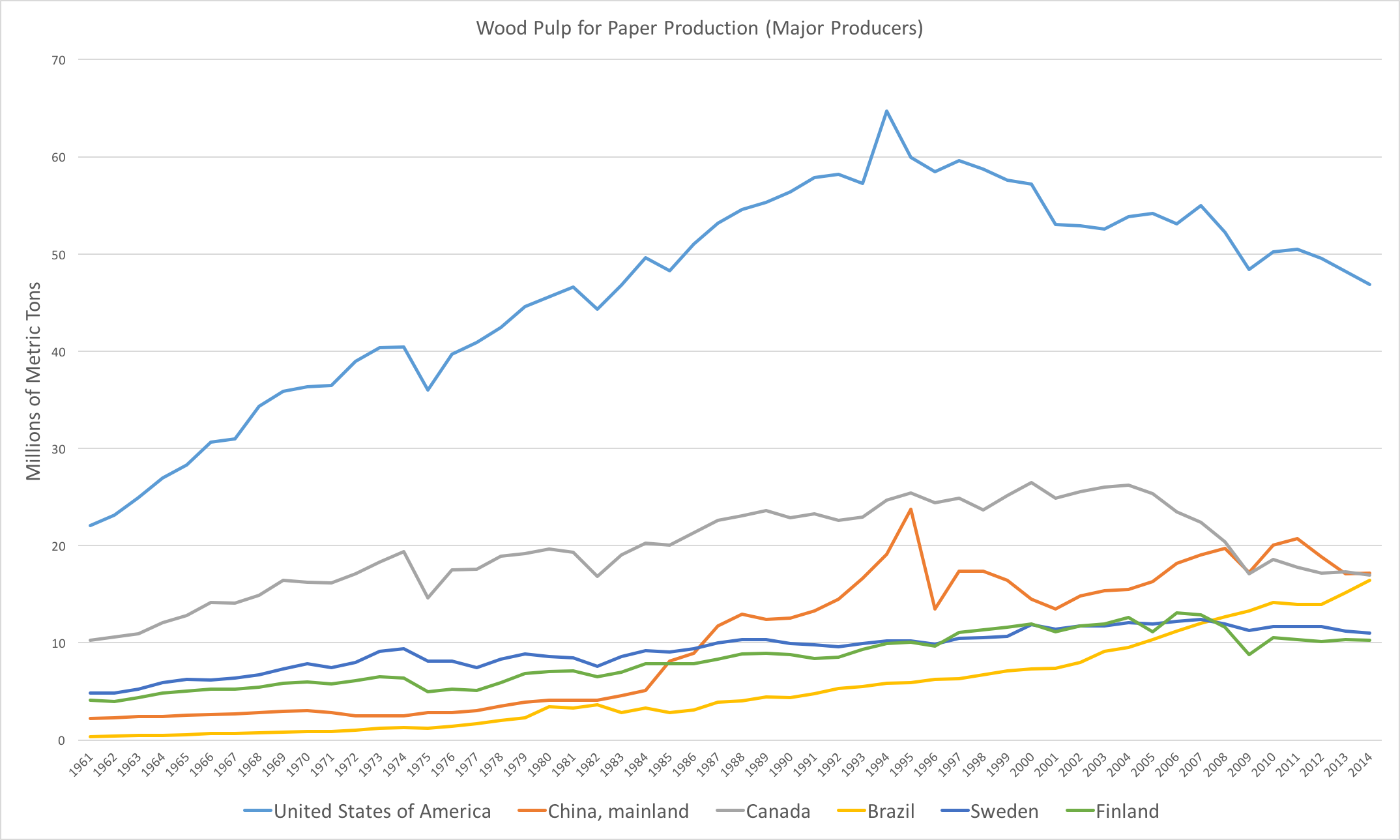 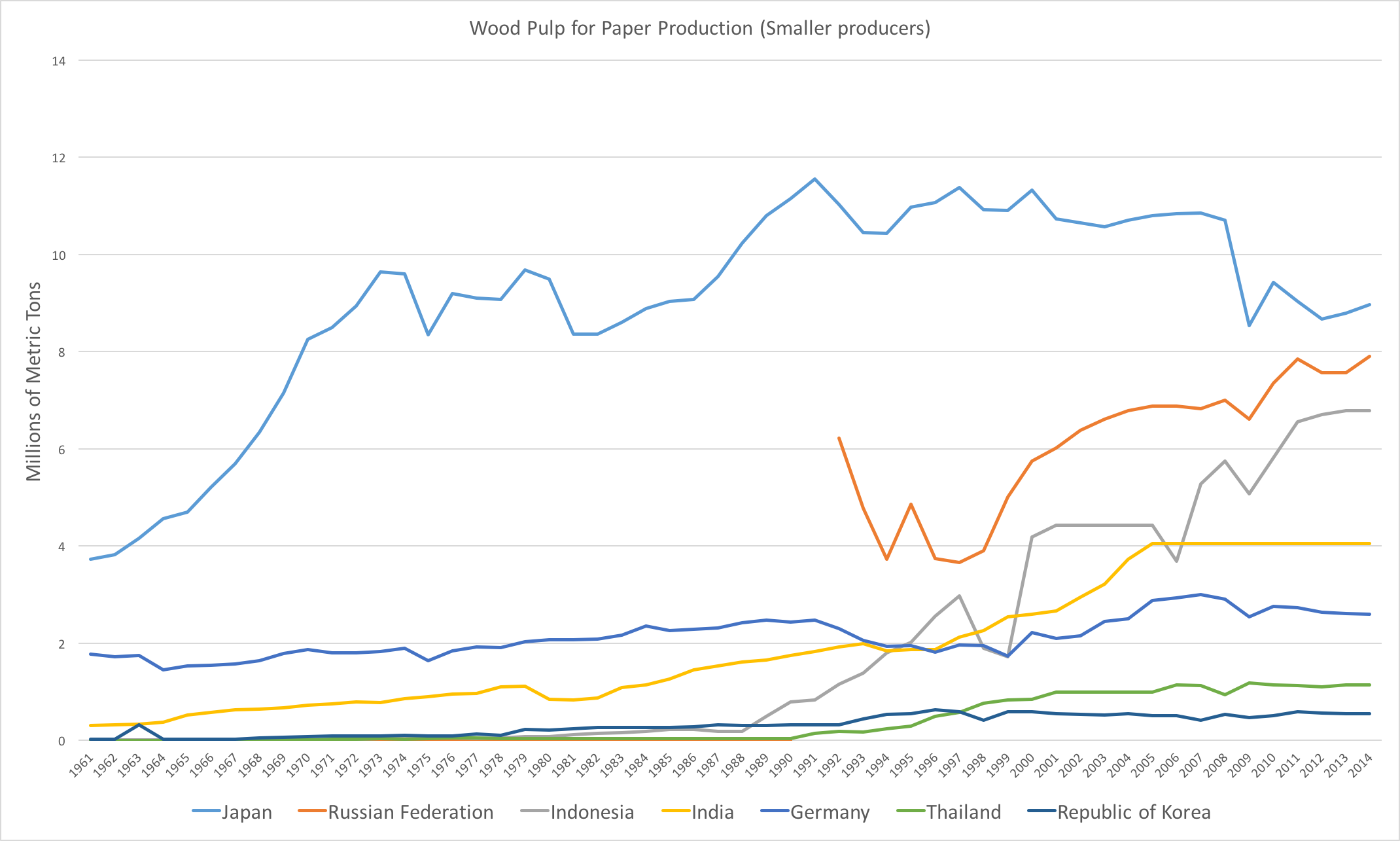 Trends of paper pulp production in the highest producing countries (top) and some of the second-tier producers (bottom). While this statistic only pertains to paper, it tells a similar story to the timber industry as a whole. Data for Russia only available since 1992. Source: UN Food and Agriculture Organization. Click for larger images.

The top countries saw production increase steadily until the mid-90s. China entered the scene with dramatic growth in pulp production between the mid-80s and mid-90s. Production declined in the U.S. and Canada beginning in the 90s and stayed roughly steady for other major producers, while smaller producers such as Brazil, Russia, India, and Indonesia saw significant gains.

Beyond the changes it has brought to Maine, the shift in the global timber industry has had a substantial impact on the countries it is moving to as well, both economically and environmentally.

Economically speaking, the paper industry can be a key player in a country’s development. In a developing country, it’s important to build industries that offer both high levels of employment and relatively high economic output. The manufacturing sector in general strikes an important balance between these factors. Agriculture, particularly subsistence farming, employs huge numbers, but offers very little economic output, while the service industry creates a lot of economic output, but employs few people initially. Within the realm of manufacturing, industries that can be productive with little advanced technology are more advantageous. They require less investment to set up and require less skilled workers to run. That’s why the modern influx of Chinese goods to the U.S. began with t-shirts and rubber ducks, not computers and cars. Paper is one of those industries, as are many basic wood products (such as the dowels that Cummings Mill used to make). A paper mill, especially one that relies more on manpower and less on automation, can employ a lot of people and create solid economic output.

A paper industry, of course, requires a lot of trees. China, Southeast Asia, and Brazil both have (or at least had) plenty of forest and, particularly in China’s case, few qualms about cutting through it. But not all countries have the resources or systems to actively engage in and manage timber harvesting. In India, for example, usable forest land is there, but it is owned by the government, which has been reluctant to let it be harvested for manufacturing. And not entirely without reason. The developing countries with large paper industries have struggled to harvest wood sustainably, leading to serious loss of forest cover in some places. Brazil, despite signs of improvement a few years ago, is struggling with rising deforestation rates once again. The deforestation situation in Burma is quite serious as well: total forest cover has declined to 45% from 65% just fifteen years ago. The government responded to this situation by banning exports of raw timber last April, but a massive illegal trade continues, possibly in the billions of dollars. The reasons why are complex:

Burma’s former military rulers are often criticized for having overseen a decades-long plunder of the country’s natural resources, but more than a dozen ethnic armed groups on the nation’s peripheries have also used this natural bounty to fund their operations and enrich their leaders.

…Illegal logging at the country’s borders is either directly or indirectly linked with non-state armed groups whose members, even if they are caught, may not face prosecution from a government that is reluctant to potentially jeopardize a peace process that it initiated in 2011.

The Ministry of Environmental Conservation and Forestry’s ability to enforce the law is further limited in northern Burma by active conflict, leaving the Burma Army—an institution with a checkered track record on human rights and transparency—best positioned to police the timber trade.

Much of this illegal timber trade is heading to China via Burma’s mountainous regions. Burma, at least as of 2013, was China’s second largest wood supplier by dollar value and fourth largest by volume. While I don’t want to overstate it, it seems at least a little bit of the paper coming from China is, in a way, conflict paper. China is also a major importer of timber from the Democratic Republic of the Congo, where most timber harvesting and export is done illegally, and in some cases violently. However, we can’t place the blame entirely at China’s feet, since the U.S. and E.U. have been importing some of this illegal timber as well.

Despite generally relying on sustainable logging practices and not buying supplies from conflict areas, the Maine timber industry is unlikely to make a comeback, with or without these virtues. Even if the countries with booming paper industries rein in some of their questionable supply methods, they will still have the advantage of a much cheaper labor force for the foreseeable future. In combination with the slowing demand for paper products as new communications technologies are more widely adopted, it’s hard to see a resurgence in the Maine timber industry down the line. It’s high time to find the industries that can replace it, so we can start seeing some better news.

Phoenix McLaughlin works at the National Endowment for Democracy helping to foster political development in Asia. Phoenix lives in Washington, D.C. now, but was born and raised in Norway, Maine. In between, he has studied and/or worked in Colorado, Nepal, India, France, Ethiopia, and Augusta. All opinions expressed on this blog are solely his own and do not represent his current or former employers.

This blog has been archived

This blog has been archived and is no longer being updated.